Britain's Newest Princess Is Already Up to Her Bib in Bling

Born Saturday, the teeniest member of the British Royal Family — Princess Charlotte — is already up to her bib in bling.

Kate Middleton, the Duchess of Cambridge, safely delivered her second child on the morning of May 2, and only two days later, The Natural Sapphire Company of New York announced that it had designed a bejeweled custom baby rattle, fit for a princess. The gift is fashioned in 18-karat white gold and encrusted with blue sapphires, rubies and diamonds in the red, white and blue pattern of the Union Jack. 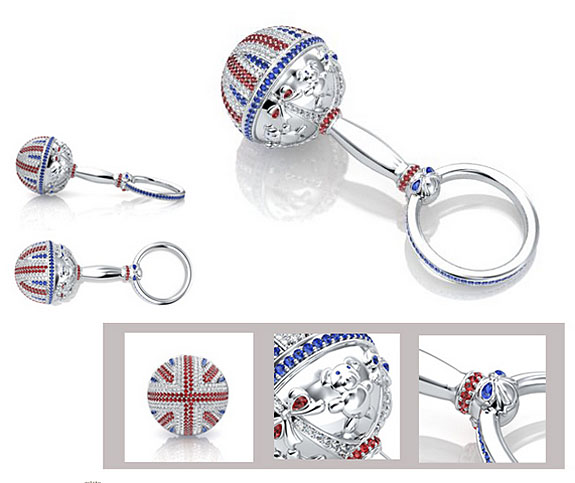 The firm is also looking into the possibility of added Welsh Gold to the rattle as a symbolic connection to the parents' wedding bands. Prince William and Middleton continued an 88-year tradition of the British monarchy when they exchanged vows using wedding rings made of rare Welsh gold. 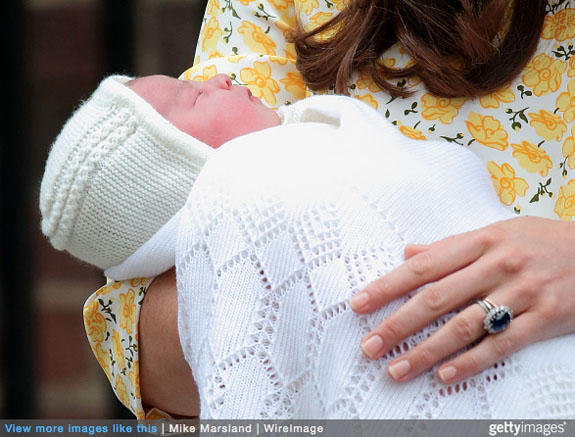 Natural Sapphire Company spokesperson Yvette Tse told us that the rattle will be about five to six inches in length and is valued at $45,000. "It will be fully functioning, though it probably shouldn’t be used by an infant," she said. "It’s more of a commemorative object.”

Executives at The Natural Sapphire Company have a particular fondness for the royal couple because the firm's sapphire ring sales skyrocketed after they were engaged in November of 2010 with the iconic blue sapphire ring that once belonged to William's mother, Princess Diana. The ring featured 14 white diamonds surrounding a 12-carat oval blue Ceylon sapphire set in 18-karat white gold.

Princess Charlotte's new rattle is a token of the company's gratitude for the couple introducing the world to the beauty of sapphires.

Interestingly, back in December of 2012, when Buckingham Palace confirmed that Middleton and William were expecting their first child, The Natural Sapphire Company pulled out all the stops with a creative and head-turning baby shower gift — a sapphire-and-diamond pacifier in the classic Princess Diana style.

The pacifier's design had a core of small blue sapphires surrounded by 8 carats of round brilliant-cut diamonds. At the time, the company recommended a variation in the design that would replace the smaller sapphires with a single 69.35-carat sapphire called The Titan's Eye. A company spokesman had said that the large sapphire, which had a price tag of $1.38 million, would be the most "baby proof."

A company spokesperson predicted at the time that the sapphire-and-diamond pacifier would connect mother and baby “not only by blood, but by fashion sense as well.” Tse said that although the pacifier was designed, it was not delivered to Middleton and little Prince George, who was born in July 2013.

Tse confirmed that the bejeweled rattle is about to go into production and will be hand delivered in a month or so to an organization that collects gifts on behalf of the royal couple.