When BuzzFeed tells its readers that your lip-dub marriage proposal video is the best thing they will see on the Internet today you know you hit it out of the park.

That's exactly what happened on Saturday as the masterfully choreographed six-minute video of Bret Piere's proposal to Jovan Gonzalez started to go viral on YouTube. Posted on Friday, the video already has been viewed more than 1.3 million times. 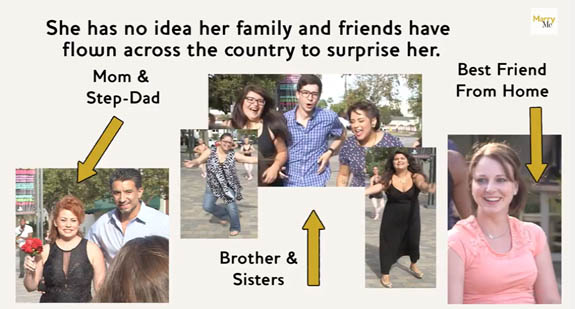 We love epic lip-dub marriage proposals and this one ranks right at the top. Of course, Piere couldn't have done it alone. He received a giant assist from the makers of NBC's brand new series, Marry Me, who created a Hollywood-quality production number that included a huge cast of characters, including 40 dancers, family members and close friends lip-syncing to "Geronimo" by the Aussie group Sheppard.

To help promote the premiere of Marry Me, which airs tonight (Tuesday) at 9/8c, NBC's digital team thought it would be a great idea to assist a young couple with an epic and heartwarming marriage proposal. The new sitcom deals with the trials and tribulations connected to the pending engagement of actors Ken Marino and Casey Wilson. 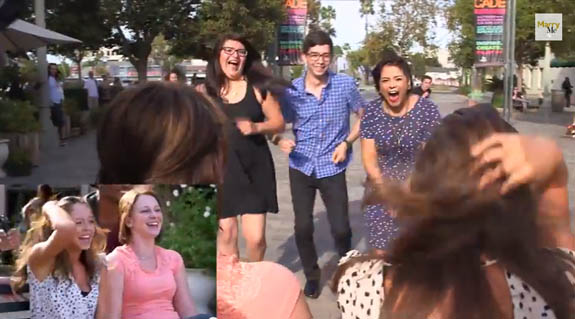 The viral video starts off with Gonzalez sitting down for lunch with a friend at an outdoor café in Los Angeles. Then the music starts and the shocked young woman is taken on a wild ride — both literally and figuratively — that includes surprise appearances by her best friend, mother, stepfather, siblings, nieces, nephews and more.

These cameos were really special because Gonzalez had moved to L.A. from Chicago months earlier and had not seen any of her loved ones since she left. Piere had specially arranged for them to fly to the West Coast to be part of the proposal.

Gonzalez is carried on a bench and then escorted through the blocked-off streets that look like a Hollywood movie set. At every turn she's introduced to a new group of characters, from ballerinas to football players.

Finally, her prince charming makes his appearance dressed up in a flight suit reminiscent of Tom Cruise in Top Gun. Piere joins the dancers and shows some slick moves of his own before disappearing from the scene. When he returns a few seconds later, he's wearing a formal tuxedo and carrying a diamond ring.

The music stops and Piere goes down on one knee to deliver his touching proposal: "Every bone in my body, every breath in my lungs wants to spend the rest of my life with you. It would be my honor if you'd marry me. Will you marry me, Jovan?”

Amidst the cheers from her family and friends, she says, "Yes.”

The video presentation utilizes a clever picture-in-a-picture technique that allows the viewer to see what Gonzalez is viewing, as well as her reactions.

The couple was extremely appreciative of the assistance offered by NBC's team. "I just really want to thank NBC's Marry Me for making this happen," said Piere. "I wanted her to remember this for the rest of her life and now [that] we had that chance and opportunity, and I'm so grateful."

"Amazing," said Gonzalez. "Thank you so much!"

Follow the couple at their Facebook page, Bret & Jovan – a Couple's Journey from NBC's Marry Me Flash Mob Proposal. And view the viral video below.