Precious Jewels Dating Back 3,500 Years Discovered in Tomb of the 'Griffin Warrior'

The tomb of a Bronze Age warrior — left untouched for more than 3,500 years and stocked with a trove of precious jewelry, weapons and grooming supplies — was recently unearthed near the modern-day city of Pylos, Greece. 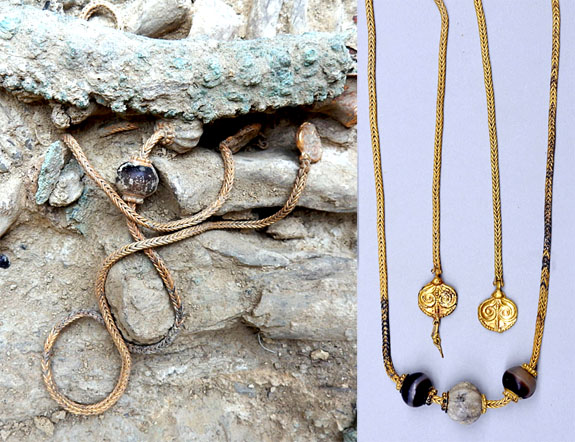 Among the jewelry items found in the tomb were four intricately carved gold rings, four dozen decorated seal stones, a 30-inch gold necklace terminated on both ends with medallions and a colorful array of 1,000 precious stone beads, including carnelian, amethyst, jasper and agate. Many of the beads were drilled, indicating they were once strung together as necklaces or bracelets.

The University of Cincinnati husband-and-wife team of Sharon Stocker and Jack Davis are credited with discovering the tomb of a wealthy Mycenaean warrior. The tomb measured 4 feet by 8 feet and was 5 feet deep. 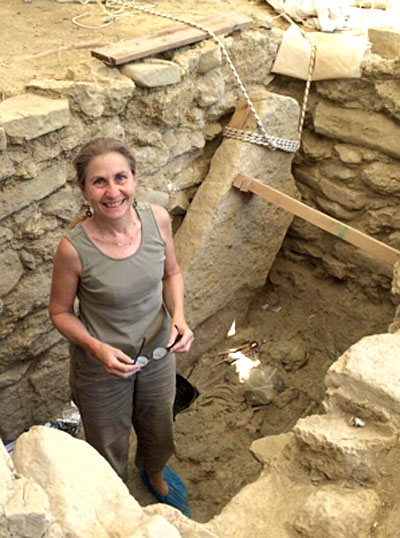 The archaeologists, who have been researching Greek historical sites for a quarter century, called the warrior's tomb "the find of a lifetime." They affectionately dubbed their prized subject the "Griffin Warrior" due to the fact that a griffin — the mythical creature with the head and wings of an eagle and the body of a lion — was depicted on an ivory plaque that lay between the warrior's legs. All the items in the tomb are believe to correspond to the time period between 1600 B.C. and 1400 B.C.

The warrior, who was 30- to 35-years-old at the time of his death and lived more than 100 years before the rise of classical Greek culture, was believed to be extremely wealthy due to the exceptional items that accompanied him to the afterworld. Instead of standard pottery, this warrior was buried with bronze vessels rimmed with gold and silver.

The archaeologists also found a 3-foot sword adorned with an ivory handle, a gold-hilted dagger, a bronze slashing sword and a bronze spearhead.

Good grooming was apparently seen as a virtue in the afterlife, as the warrior was appropriately buried with not one, but six, fine-toothed ivory combs and a bronze mirror with an ivory handle.

All the jewelry items demonstrated a high level of technical skill. One gold signet ring, for instance, is expertly decorated with images of two acrobats vaulting over a bull (a popular activity at the time). The 30-inch-long, solid gold necklace is meticulously woven and decorated with finials in a "sacral ivy" pattern. The Minoan seal stones depict goddesses, lions and bulls.

Stocker explained to The New York Times, that when tombs have multiple occupants, it's difficult for archaeologists to assign particular items to males or females. In the case of the Griffin Warrior, all the items — no matter how masculine or feminine — are tied to him.

The tomb of the Griffin Warrior was actually discovered by Stocker and Davis back in May, but Greek authorities chose to keep the news under wraps until this past Monday.